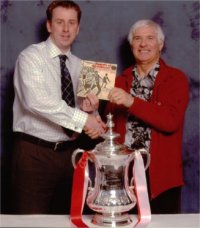 Mick will be singing “The Flowers of Manchester” live at Old Trafford on Wed’s 30th Jan, the song will be performed during the half time interval of the SKY televised match between Man Utd and Portsmouth.

Dave Hulmes, a committed Manchester United fan has persuaded Mick to to re-record The Flowers of Manchester, the song based on Eric Winter’s poetic tribute to the victims of the 1958 air crash.

This new rendition has been recorded both to commemorate the 50th anniversary of the disaster and to raise money for the Manchester Kids charity http://www.manchesterkids.com

Dave Hulmes said:
“I have a copy of Mick’s original EP and over the years have worn it out listening the song that evokes that terrible night and holds memories for Manchester United fans of a certain generation. As the 50th anniversary approached, I wanted to remind younger fans of the impact of the event and do something for a local charity. A few phone calls later and Mick kindly agreed to re-record Flowers and Audrey Winter, Eric’s widow, kindly gave it her blessing.”

The CD has been produced by another folk legend, Phil Beer of Show of Hands, and contains a new arrangement and a reworking of the original recording. It is available from http://www.flowersofmanchester.net. Wednesday 3rd Oct. Mick accompanied by Becki Driscoll (fiddle) @ THE WILLOWS FOLK CLUB, Arundel Football Club 7.30 pm. info from Chris Davis 07790511054. chris@willowsfolkclub.org